When the Banjo was King 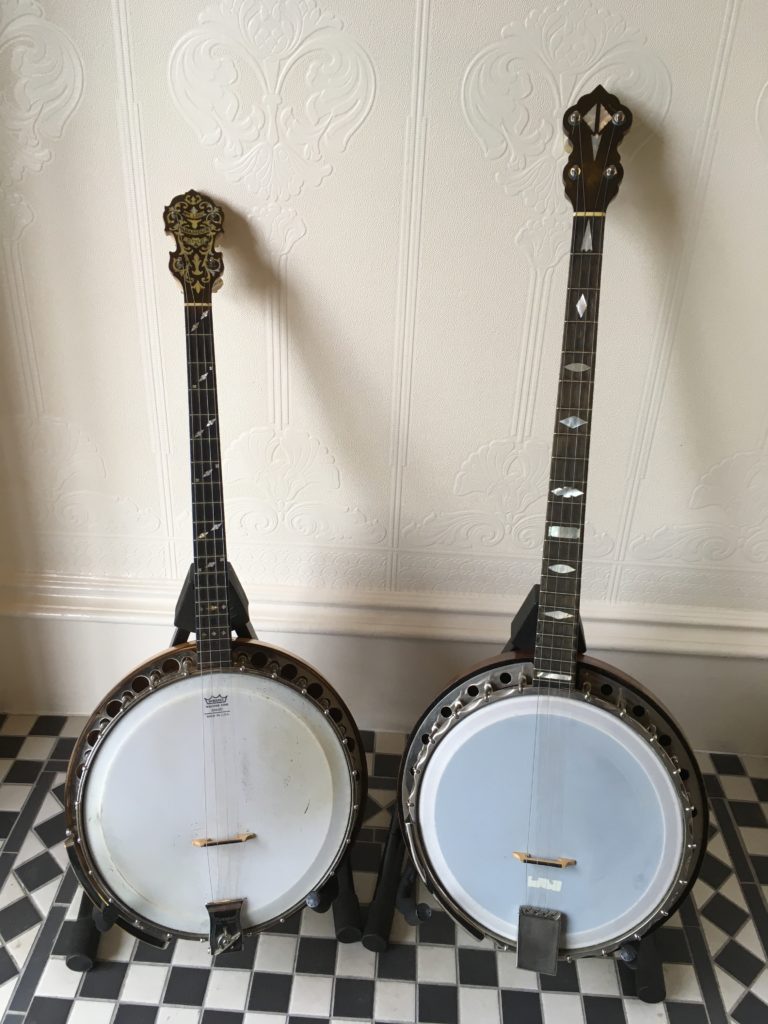 Well here’s a first for us and something just a little different which involves a glimpse back to the days of pre-electric music when all instruments had to rely on their own natural / acoustic volume to be heard in a band setting. In those days the Banjo rather than the Guitar was definitely king on account of it’s greater volume, projection and clarity. Please allow me to indulge in a bit of my personal musical history which I hope you will find of interest…

Back around 1970 while I was starting to copy Guitar solos from Jimi, Eric and Carlos my Dad was the Secretary to a Banjo Band / Orchestra called The Darlington Banjoliers, and later a smaller Band called The Happy Days Banjo Band. 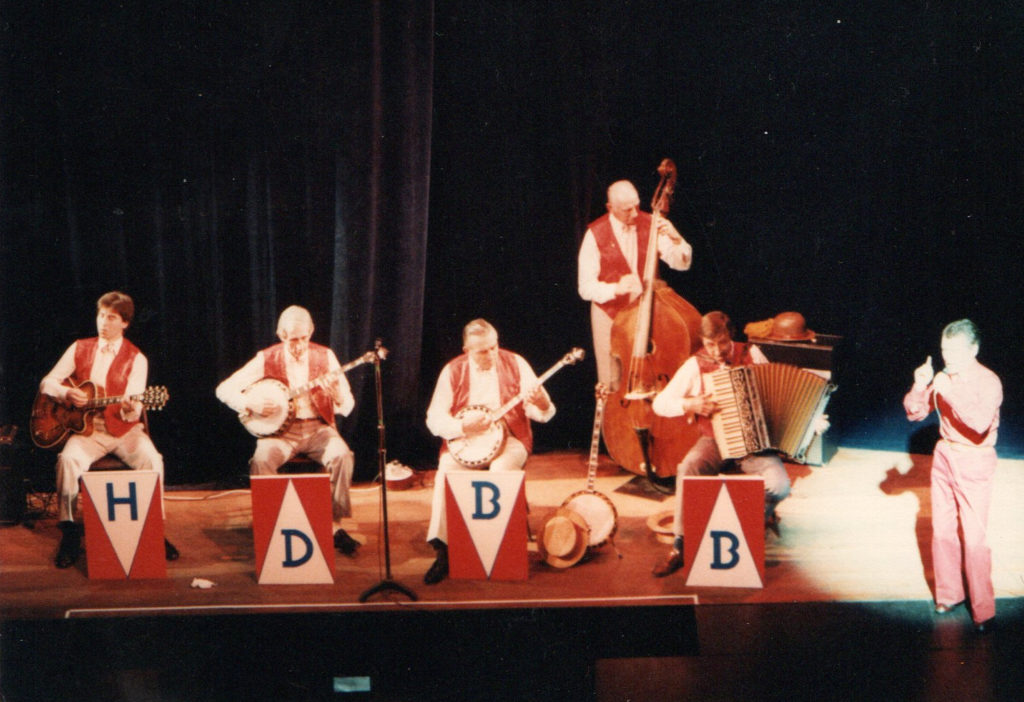 Both Bands played Trad Jazz standards from the 1920s and 30s – the heyday for Banjos before the Electric Guitar was born. I occasionally went to listen to them but my head was full of feedback and power chords so it wasn’t quite my thing at the time.

I did however start Guitar lessons with Albert Nicholson who played Banjo in the Band. Here’s Albert as a dapper young man playing Banjo with the “Corona” Dance Band – which would have taken on a whole new meaning today…

Albert was one of my first Teachers and we worked together through the Mel Bay series learning scales, chords and a bit of Theory. Albert was most definitely old school so we don’t cover much Blues / Rock I’m afraid. 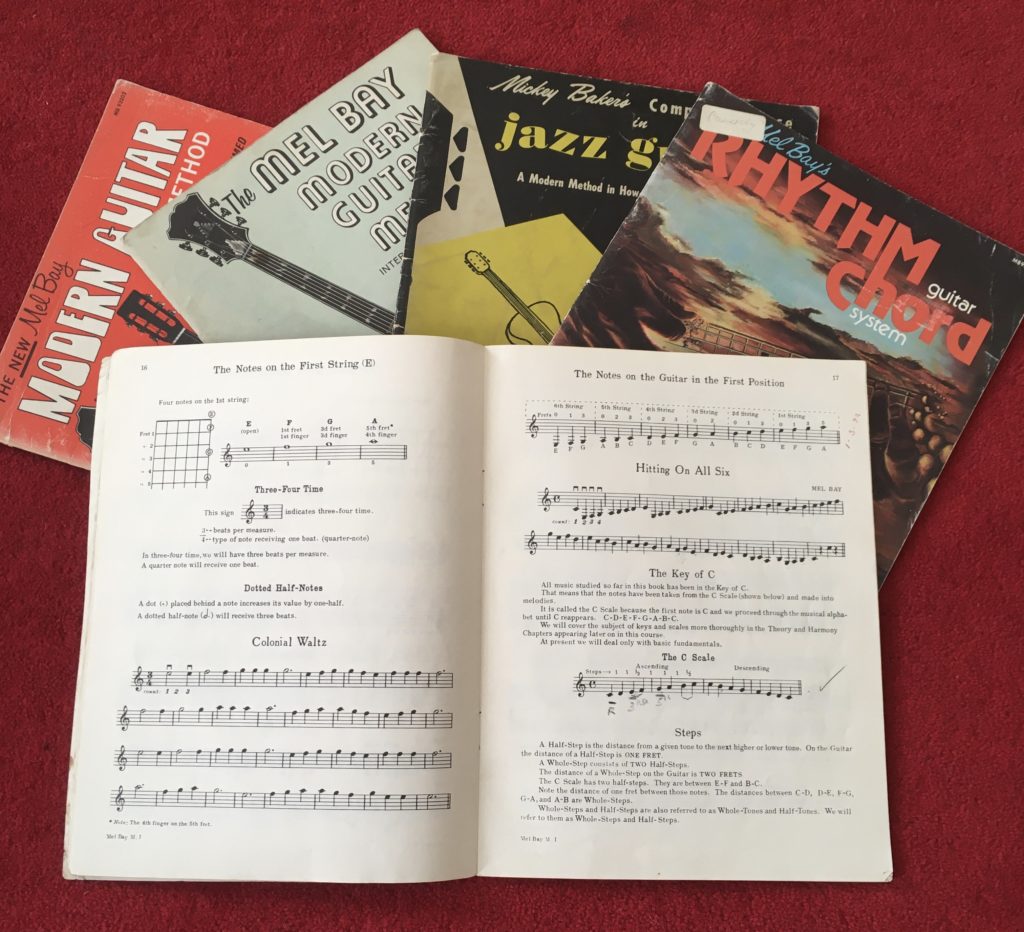 You can see Albert here at home in his Teaching room with his Epiphone Acoustic, an Hawaiian / Slide Guitar and a Banjo which you will be hearing a bit more about later. 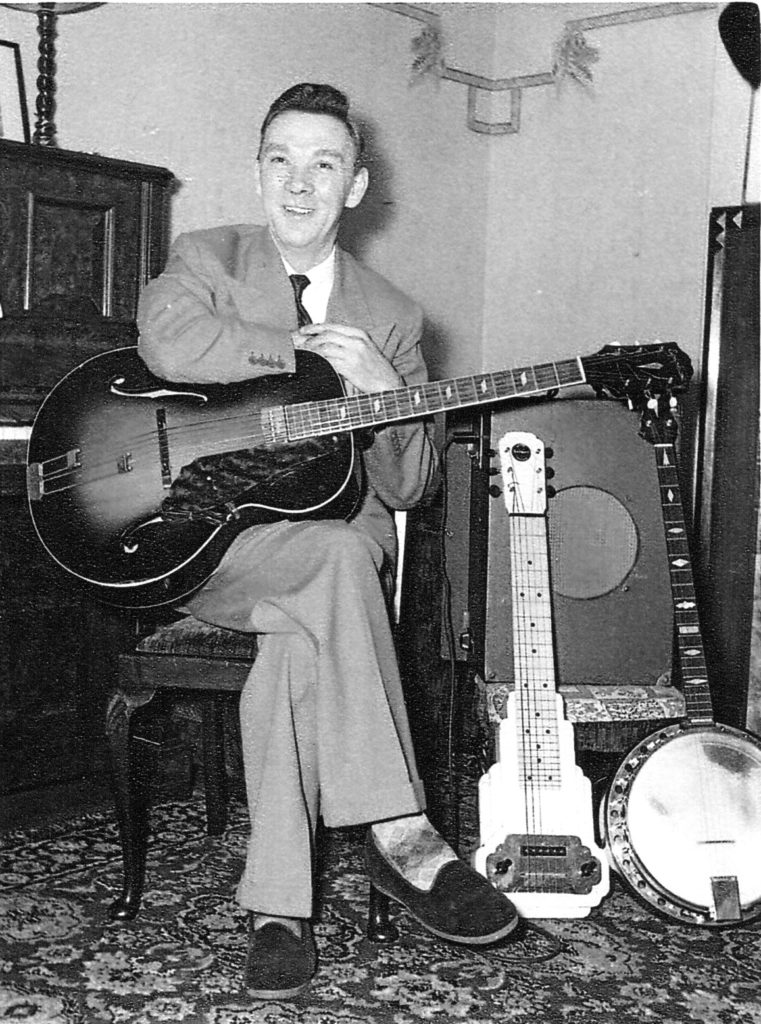 My Dad became very good friends for many years many members of the Bands, but in particular Percy Bradley who played a 3 String Double Bass and Tom Pegg who played a 4 String Banjo. I spent many a night during the late 1970s and early 1980s out for a Pint or 2 with my Dad, Percy and Tom putting the World to rights… 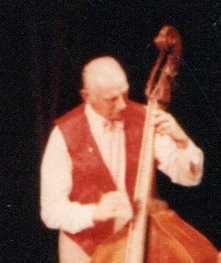 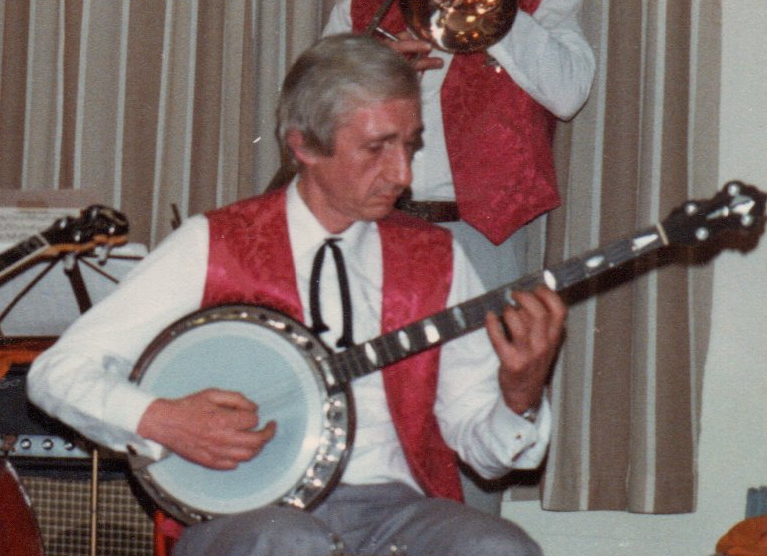 It was over the last 15 years or so that I got to know Tom better as he lived around the Corner from me and called in for regular morning Coffee / chats about my latest Guitar Build project. Tom did his apprenticeship as a Marine Engineer and served on many Merchant Ships around the World. Always keen to find the nearest jazz Club when he was in Dock, New Orleans was definitely Tom’s favourite.

As well as being a mine of information on Jazz from the 1930s through to the 1960s, Tom had a brilliant Engineer’s mind and was always interested some of the practical problems I was working on with Guitar builds and setups, often helping to find simple solutions to what I had considered to be a complex problem. It also turned out that Tom had taken Banjo lessons from Albert Nicholson (my old Teacher) alongside playing in the Darlington Banjoliers. During our many conversations, Tom showed me his fine collection of Banjos which are indeed antiques from the pinnacle of Banjo manufacture in the 1920s and 1930s.

Sadly our sparkling morning coffee conversations came to an end as Tom passed away recently at the fine old age of 88 after a short illness. I was very pleased to put together the music for his funeral service which featured some find old Banjo tunes and his favourite Jelly Roll Morton and The New Orleans Jazz Band.

It was after Tom had passed away that his Daughter Deborah asked me to sell a couple of Tom’s Banjo’s on behalf of the Family which I was happy and privileged to agree to. I was very interested to note that the John Alvey Turner Plectrum Banjo previously belonged to my old Guitar Teacher Albert as you can see above photos of both Albert and Tom with the Banjo.

So here we have what is probably the only time I’ll be selling Banjos.

The first of these is a 1927 Wm L Lange Paramount Type A Tenor Banjo SN : 8880. Paramount were one of the leading manufacturers of Banjos in the 1920s and the pinnacle production year for them is generally regarded as being 1927. There’s quite a bit history about the Rettburg & Lange banjo company from New York dating back to 1897, who later produced the first Orpheum banjos in 1908. In August 1920 the Orpheum Company was granted a US patent for its new “Paramount” banjo and this new instrument (designed by Wm L Lange) made its first appearance in 1921. In 1922 Lange took over sole control of the company and changed the title to Wm L Lange. In September of that year he announced (as successor to Rettberg & Lange) six styles of the “Paramount” banjos. “Paramount” banjos became world famous and were much sought after by all the leading dance-band players. The five spacious floors at East 24th Street accommodated over 250 workers making banjos and included its own plating shop. It was during this period that Wm D Bowen tested all banjos leaving the factory.

This beautiful example has been lovingly cared for and played over many decades and appears to be in original condition. 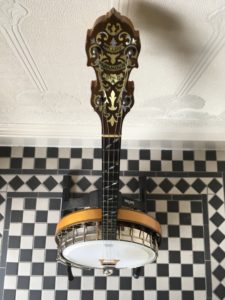 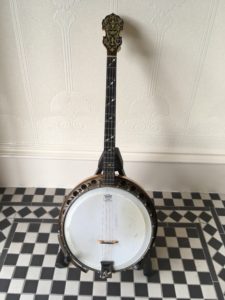 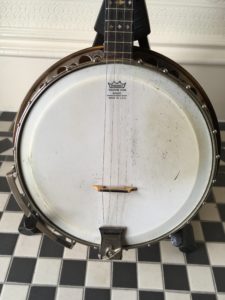 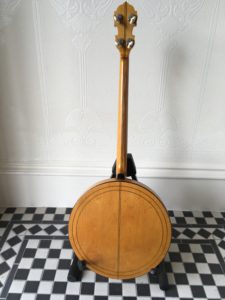 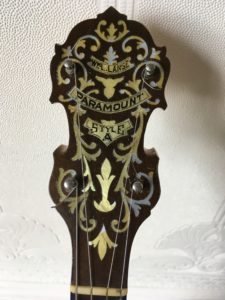 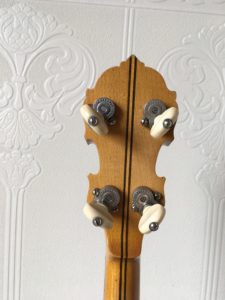 The second one is a John Alvey Turner London 22 Fret Plectrum Banjo SN : 114. As you will see from their Company History they have been supplying musical instruments since their first shop was  opened in London in 1790. At the peak of popularity of the Banjo in the early part of the 20th Century they employed a number of small manufacturers to produce their Banjos before applying their stamp. Unfortunately the Company do not have any records of Serial Numbers so I’ve been unable to date it but I guess that it must be pre WWII? It has been well used over the years but is still in good condition and plays and sounds very nice. It appears to have had the Tuners changed at some point and there also may have been a repair to the rim of the body, or maybe this could be original? 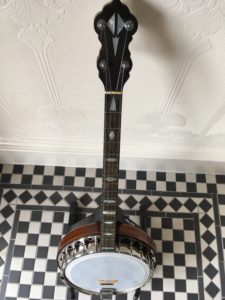 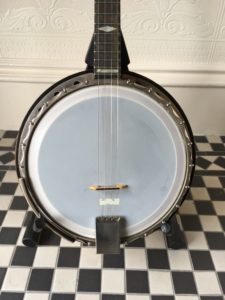 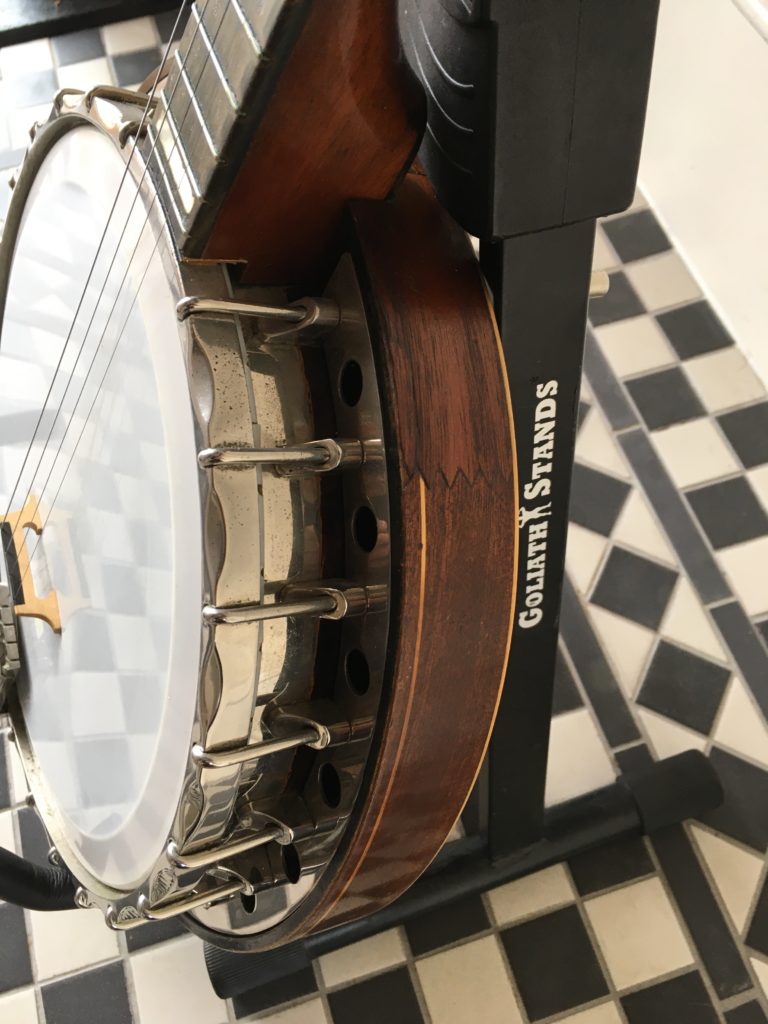 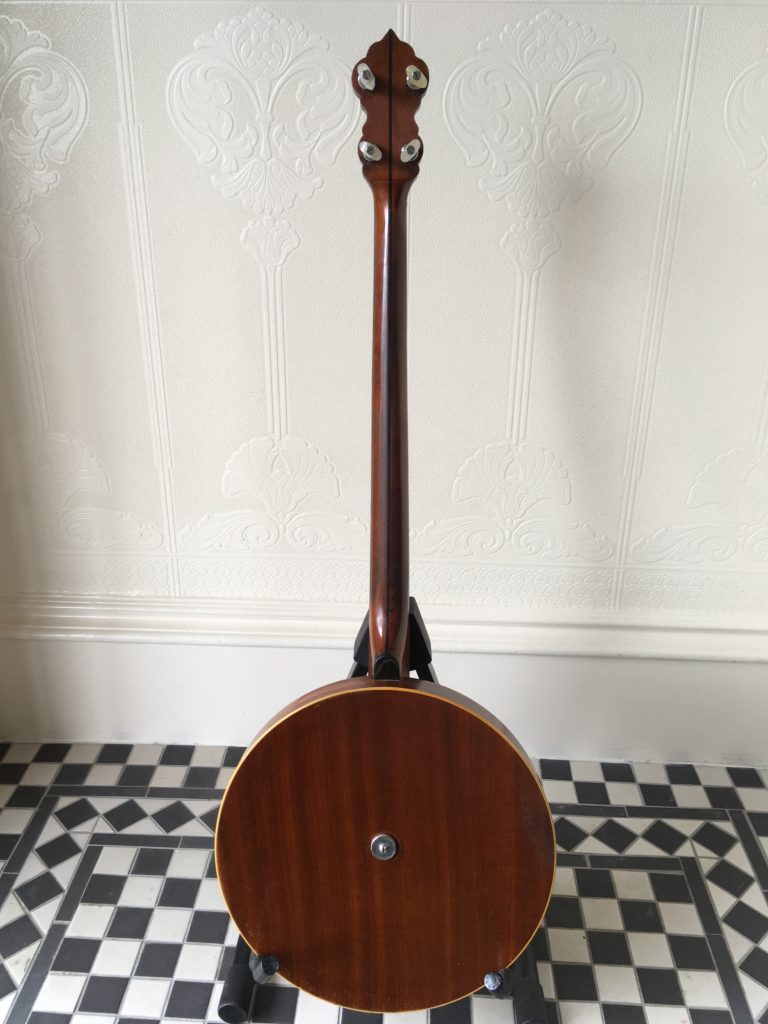 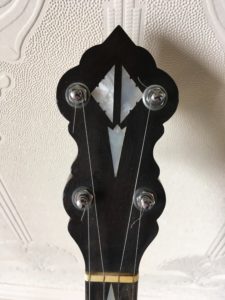 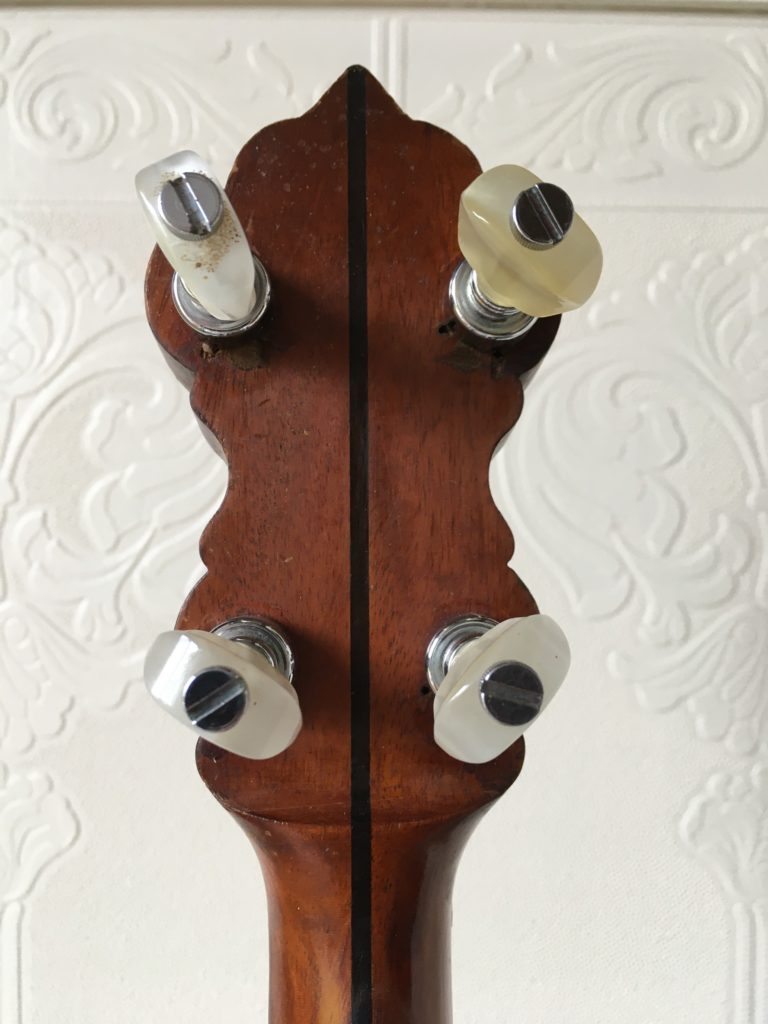 RIP Tom Tranmer Pegg ~ I’ll make sure your Banjos find good new homes where they will be loved and played again. 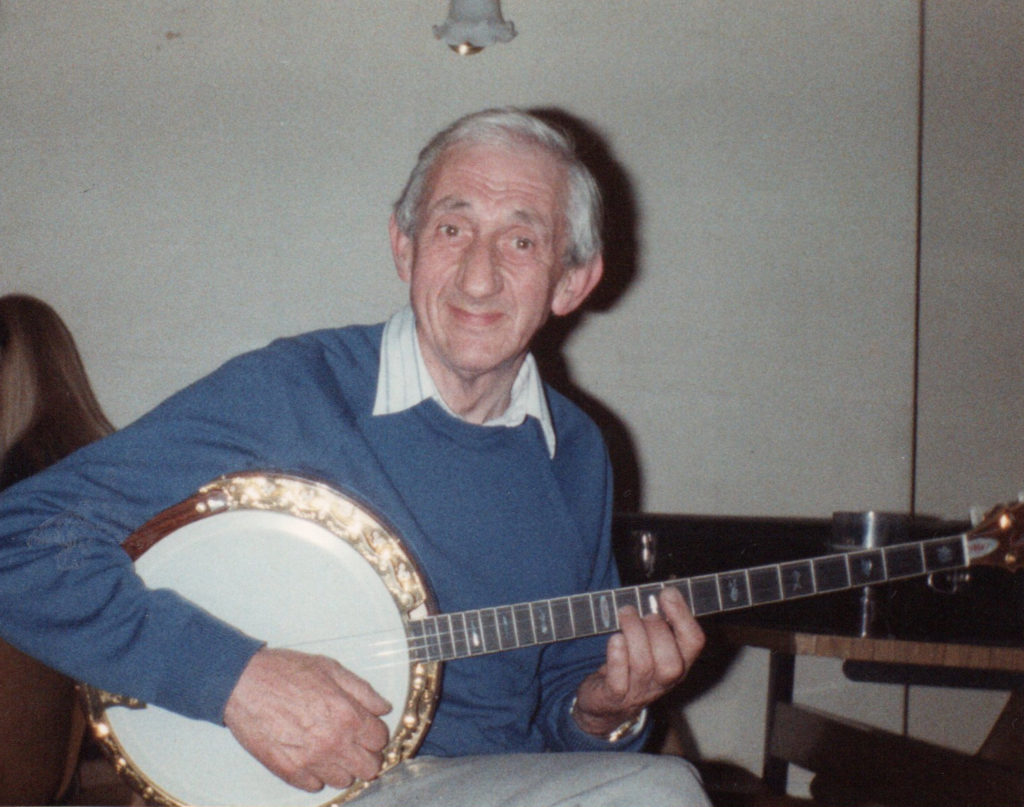