My first contact with Brian was in July 2009. He called me and said he was looking for guitar lessons and had a challenge for me – he was 60 in November 2010 and wanted to play in a band at his birthday party. Brian had played a bit as a teenager, but life then got in the way for the next 40 years or so – as it inevitably does. Now he was making up for lost time. 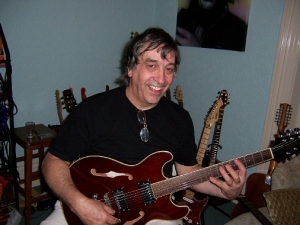 Many lessons, and numerous ebay purchases later, Brian began advertising for members of his new band. Slowly the band came together, rehearsals followed and sure enough his birthday came around with formal invites to numerous guests from up and down the country and from the continent. “Ragged Glory” was born at Brian’s brilliant 60th birthday party on 27th November 2010.

“Great night that Bri – what now then?” I asked at his next lesson.

Well the lessons continued, followed by more ebay “bargains” and Ragged Glory continued rehearsing and started taking on unpaid Charity gigs, followed by paid pub gigs. I remember going to see Brian at his first paid gig at the Globe in Guisborough – this was the next big step for him – he was a bit worried – would they “get away with it”? Well yes they did – going down very well to a packed house, and they then continued to work their way round the North East pub circuit.

Having assembled his fine collection of guitars and a great bunch of mates in his band, Brian is now also focussing on working towards achieving an advanced Electric Guitar Grade – I have no doubt he will achieve his target grade before the end of 2012. 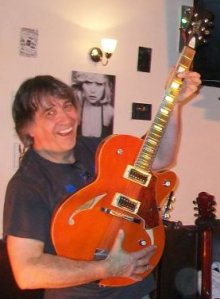 At 61 Brian is an example to us all in that you are as young as you feel and it’s never too late to set yourself some stretching targets, put the hard work in and then enjoy your achievements. Well done Brian – it has been, and continues to be, a pleasure knowing you!!!!

One final thing. This has all taken a lot of hard work, determination and, at times, courage on Brian’s part. But none of this would have been possible without the support of his lovely wife Micheline. I know Brian doesn’t need reminding of this, and Micheline isn’t one for seeking praise, but I just thought everyone needed to know how lucky he is!!!! 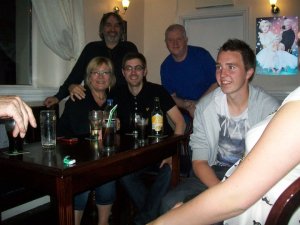