My name is Jay J Downs and I went to the Guitar Show at Kempton Park Racecourse on Sunday 23rd October as I had time off from traveling around the world on Royal Caribbean Cruise Lines performing my one man show as a Multi-Instrumentalist / Vocalist with Saxophones being my main instruments and including all wind instruments, Mandolins and Guitars, Electric and Acoustic.

I am guilty of being a Sax player who has a fetish for great Guitars and so became a collector a number of years ago with Fender Strats being my main vice and have now collected a great number from around the world and apart from Tele and other great guitars I only have one Les Paul from 1997 and it sounds great.

The only other one I liked and wished I owned was a Joe Perry Limited Edition 1959 which sounded the Nuts and belonged to my Brother-in-Law in Melbourne Australia which he bought here at Peach Guitars in Essex. That’s when I tried to steal it from him!!

Now to cut a long story short I saw a Guitar at the Show at Kempton Park and it looked Fab on passing and as I took a look around all the other stalls I thought I’m gonna go back and see this Guitar. When I did it was right at the death and the Show was closing. It happened to be a Cassidy CE501 Les Paul shape Guitar with a lovely Spalted Maple Top and Gold Fittings and a Great finish to it all.

I got talking to Simon Cassidy the owner and Manufacturer of this Guitar and found him to be a Genuine True Musician and Gentleman who believed so much in his product that it had to be great. So we plugged it in in the short time we had left and just holding it in my hands I knew it was a Beauty to Behold and Damn near as the feel of the Joe Perry Les Paul  I loved. I immediately thought I got to have this, which I did, and we packed it up quickly as we had the Security people breathing down our necks as I was the last Punter left in the building.

But to my surprise when I eventually got home on the outskirts of Essex on the other side of the country to where I was and took it straight to the Studio and plugged it in to my favourite Amp of all time (my beloved Roland JC120) I could not believe my ears as it sounded every bit as good as I had imagined, and when I put my own gauge of strings on and had another set up it sounds even better and is as close to my dream Les Paul as I could Imagine. I am so glad as I will be playing this more often than my own old Les Paul – and that is something coming from a Strat Head!! 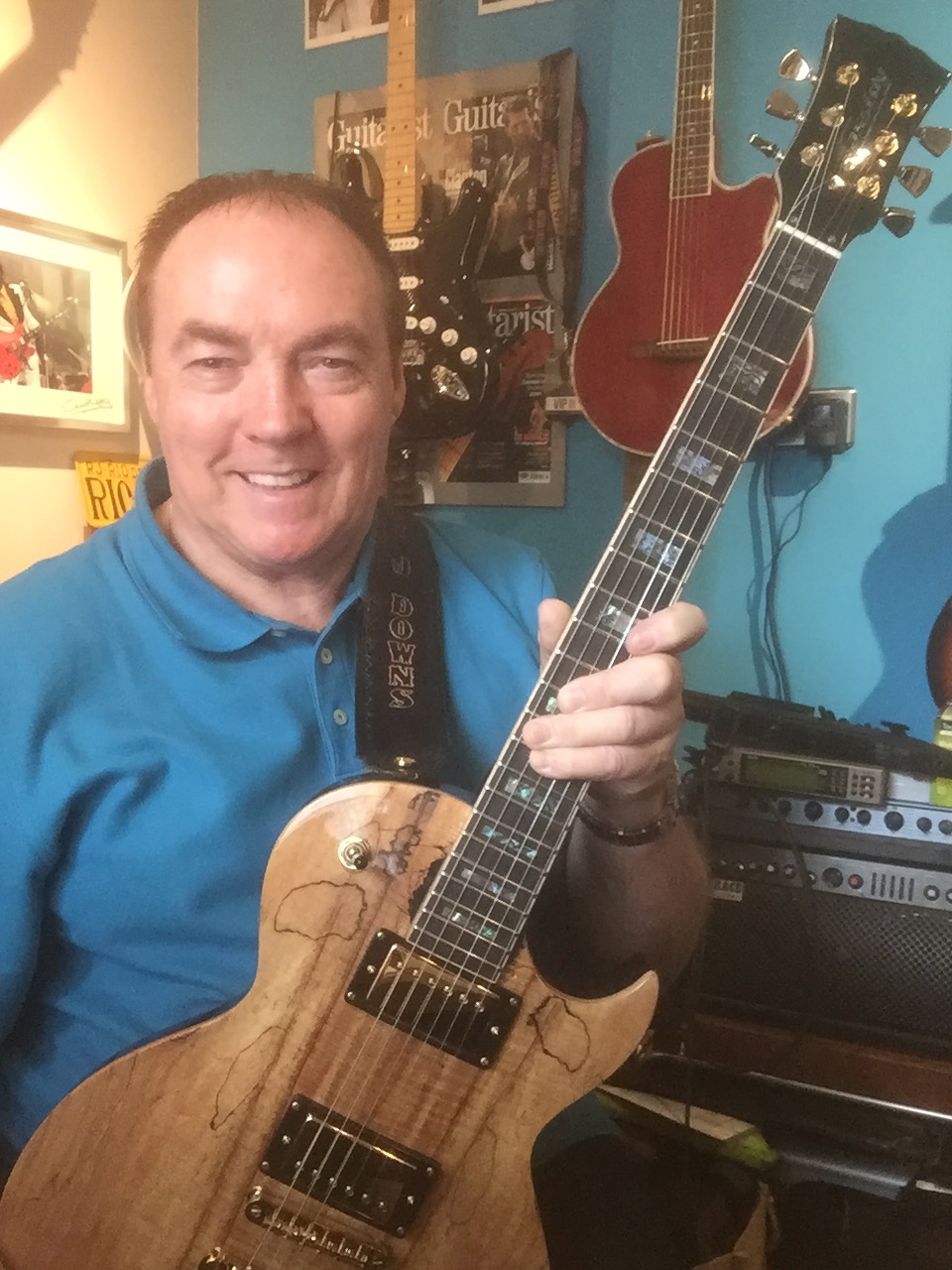 I am so Glad I took a second look at the show and met Simon and I am sure I will in no doubt be getting something else from him and already I have my eye on one of his lovely Whorlton Acoustics!

I urge you to try out some of Simon Cassidy’s Guitars as I now believe we are all so obsessed with the name Brands that we have forgotten what we can produce here with the Love and Belief Simon and other small entrepreneurs put into their own Businesses and churn out some great products.

Me and The Man!