Owen turned up for his lesson yesterday looking rather pleased with himself. Not surprising considering the guitar surprises left for him by Santa (and his Mam Tracey) on Christmas morning – a Vintage ’56 Goldtop Les Paul amongst other goodies. 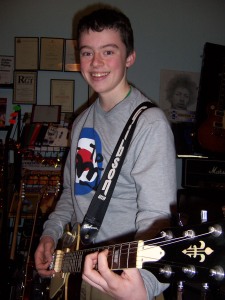 Owen is taking this whole guitar thing rather seriously – he has definitley caught the bug!!!! and he is acquiring a tasty collection of guitars.

Grade 1 with Distinction was no problem for him at the last round of exams, and at 14 I think he might be one to watch over the next few years.

Determination is one thing that Owen certainly doesn’t lack – and he is one of the very few students I have seen turning up for a lesson on crutches following a football injury!!!!! 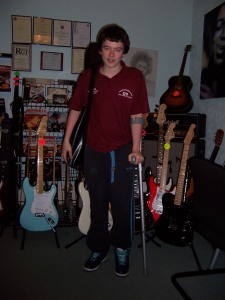 Determination in the face of Adversity

His Mam Tracey tells me he is now practising all the time – I just hope his neighbours like the weird and wonderful sounds of his new Line 6 Spider III Amp!!!!