Fame finally caught up with Sid Hill recently in a somewhat unexpected way following his launch onto the www thanks to Youtube. 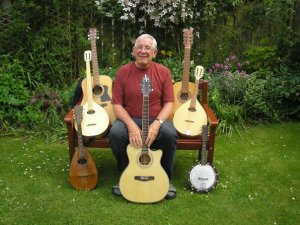 Sid came into his lesson last week and said “You’ll never guess what my window cleaner said to me last week…..He said I’ve seen you on Youtube!!!!…..He showed it to his wife and she said you were better than Keith Richards!!!!!”

Flushed with pride Sid then went on to tell me that he had treated himself to a Ukelele over Christmas. In the light of his previous story, and contemplating Sid’s next Youtube release,  I suggested that old George Formby classic “When I’m Cleaning Windows”. Unfortunately Sid wasn’t impressed ” I might be old” he said…… ” but I’m not that #!@@$? old!!!”.